Pectus excavatum is a condition in which a person’s breastbone is sunken into his or her chest. In severe cases, pectus excavatum can look as if the center of the chest has been scooped out, leaving a deep dent.

While the sunken breastbone is often noticeable shortly after birth, the severity of pectus excavatum typically worsens during the adolescent growth spurt.

In severe cases of pectus excavatum, the breastbone may compress the lungs and heart. Signs and symptoms may include:

If the depth of the breastbone indentation is severe, it may reduce the amount of room the lungs have to expand. This compression can also squeeze the heart, pushing it into the left side of the chest and reducing its ability to pump efficiently. This can cause symptoms such as exercise intolerance, shortness of breath, rapid heart rate and chest pain.

The usefulness of two-dimensional transthoracic echocardiography in the assessment of right heart compression and dysfunction produced by pectus excavatum chest wall deformity has been well described in the literature by several investigators. 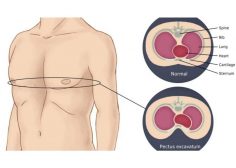 She currently holds British Society of Echocardiography accreditation and works as a Chief cardiac Scenographer in England.

Etiquetas
We use cookies to provide you with the best possible user experience. By continuing to use our site, you agree to their use. Learn more